Solving the problems of Scale build up in swimming pools

The build up of scale on the side of a pool or on the surface of your pool cover is a problem that many pool owners face. This article will give some advice on how to deal with it.

Scale or Limescale on your pool starts life as limestone in the rocks that our rain falls upon. The rain dissolves the limestone and it ends up in our drinking water and swimming pool water. Limestone is calcium carbonate, chemical symbol CaCO3. A mix of calcium, carbon and oxygen. Because we never see it in its pure form it is often forgotten that calcium is a metal.

When water evaporates, as it does all the time from the surface of your pool cover, it is the water (H2O) that evaporates leaving behind the calcium carbonate behind as a white, scaley deposit. The easiest way to deal with with the scale deposits is to put an acid on it and the acid will react with the scale and remove it. Typically in swimming pools the acid is phosphoric acid which turns the calcium carbonate into calcium phosphate (as found in your bones) which stays in the water and does not form a scale. Products like Spa No Scale contain phosphoric acid. The problem with using a chemical like that in a pool is that the phosphate formed by the reaction with the carbonate is food for algae. So you solve the scale problem but can cause an algae problem. 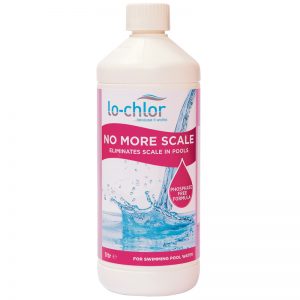 Another way to deal with the problem of limescale deposits is to prevent it from depositing. Lo-Chlor make a chemical they call No More Scale which does just this. Instead of reacting with calcium carbonate to form a different chemical it sequesters it. Seqestering is a complicated reaction but involves a chemical that bonds to a metal and prevents it from coming out of solution ie being deposited on your pool walls. Calcium is a metal, remember. So No More Scale bonds to the limescale and stops it from being left behind when the water evaporates from your pool. It doesn’t just work on the calcium in limescale it works on all metals so it will help with Iron stains as well.

We recommend that you dose your pool with No More Scale once a year in the spring to prevent scale build up on your pool cover.

You are reading the PoolStore Blog

PoolStore was the first company in Europe to sell swimming products online. For over 20 years we have been the UK's favourite internet pool supplies store.

We have an extensive Help and Advice for pool owners on our main website.