You must make a selection from all the pull down menus to proceed. 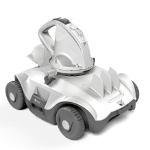 Here is an overview of swimming pool automatic cleaners, the differences and how they work

All the cleaners work by randomly traversing the pool floor sucking up the debris. So they have to be left in the pool for long enough to get to every part of the pool floor. Cheaper cleaners seem to favour one end of the pool over the other end, the more advanced cleaners will cover the whole floor evenly.

The cheapest and simplest swimming pool cleaners are Suction models. They can be as little as £75.00 but can also cost close to £500.00. The way they clean the pool is fundamentally the same for all the models, the big difference between the suction cleaners is how they move around the pool and how they don’t get stuck.

The classic suction cleaner was the Kreepy Krauly, made in South Africa it became the most popular cleaner in the UK. It works by having a large circular rubber pad that grips the floor of the pool and a plastic moulded head on to which are attached lengths of suction hose that connect to the bottom of the skimmer basket. Inside the head there is a device called the “diaphragm”, this is a rubber tube that is circular at one end and has a slit at the other. As the water is sucked through the diaphragm the head vibrates and that makes it move around the pool. On top of the head is a deflector ring to help stop the cleaner getting stuck in corners. The basic design of the Kreepy Krauly has been copied and refined by many manufacturers including Chinese companies that are producing good quality, very cheap cleaners. The SX900 and the Dipper Max are examples of Chinese made footpad cleaners that are very well made and very reasonably priced.

The Hayward Navigator is American made and has a very different design to the footpad cleaners. The Hayward Navigator and its smaller version the Magic Clean have a system of paddle wheels that are spun around by the incoming water flow and the paddle wheels attach to feet on the underside of the head unit. The feet flap around and make the head move around the pool in a spiral movement meant to prevent it getting stuck.

The Zodiac MX8 uses the incoming suction to drive the head but is much more advanced than the Navigator. It has tank tracks on the side that can go in forward or reverse and it is the only suction cleaner that can reliably clean the wall and steps of the swimming pool.

The Dolphin RS1 is called a hybrid cleaner. It is essentially a suction cleaner because the debris goes back to your filter but the this time the incoming water drives a dynamo which generates an electrical current and the electricity drives the wheel motors and an electronic control system. This means is has a “brain” to use for finding its way around the floor of the pool, backwards and forwards, without getting stuck.

Electric Pool Cleaners usually work off a 24 volt supply. This means they are perfectly safe in the pool and even if one did go wrong a shock of 24 volts would be barely noticeable. They have a transformer that plugs in to the mains supply and a waterproof floating cable that supplies power to a cleaning head.

In the cleaning head there is a lot of clever electronics used to guide the head around the pool without getting stuck. An electric pool cleaner will have a motor that sucks the water from the underside in to the head. The pool water will pass through a filter which can be a bag or a fine paper cartridge and all the debris will collect within the head. At the end of the cleaning cycle you must clean out the bag or filters ready for the next time you use it. Electric cleaners use motor power to drive themselves around the pool. Some have wheels but the more advanced ones have tank tracks. When they meet the wall they start to climb it and the carrying handle which hitherto had been at right angles to the tracks will become parallel to the tracks. This movement of the handle relative to the tracks is detected by the cleaner so it knows it is on the wall and a secondary motor kicks in to keep it pinned to the wall. Once it reaches the water line the handle drops back slightly and this triggers the cleaner to scrub the water line for a while. When it has finished it goes in to reverse and back to cleaning the floor. The electronics within decide when it will clean the walls and when it will clean the floor.

Because the more advanced cleaners have paper filter cartridges they can pick up much finer debris than even your sand filter can collect leaving the floor of your pool spotless.

Further advancement in technology means that some cleaners can be remote controlled by the pool owner to drive it in to any area it may have missed.

The Tiger Shark and the Dolphin M4 are highly advanced cleaners with paper filters. Both equally good at cleaning, the Dolphin’s filters are easier to get at. The Dolphin M5 is the remote control version of the Dolphin M4.